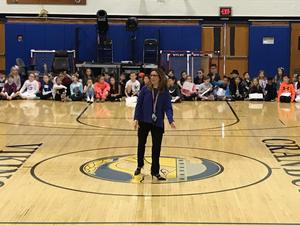 For her efforts to lead and support not only the Cranbury School District but also educators throughout the county during a global pandemic, Dr. Susan Genco has been unanimously chosen as the 2021 Middlesex County Superintendent of the Year by the Middlesex County Association of School Administrators (MCASA). Dr. Genco during a Read Across America Assembly

(NOTE: This announcement is being published as a surprise for Dr. Genco!)

CRANBURY - Leading a school district is not easy. Doing it during an unprecedented educational and health crisis is another challenge, entirely.

For her efforts to lead and support not only the Cranbury School District but also educators throughout the county during a global pandemic, Dr. Susan Genco has been named 2021 Middlesex County Superintendent of the Year by the Middlesex County Association of School Administrators (MCASA).

“Dr. Genco has been a true educational leader, receiving a variety of accolades for her numerous accomplishments throughout her career,’’ said Cranbury Board of Education President Karen Callahan. “However, to be honored during a year when school districts faced unending challenges like never before, speaks volumes about her dedication, professionalism and commitment.”

Each year, the MCASA asks members to nominate a colleague deserving of the award and a vote is taken. This year, Genco was nominated by every single member of the organization, which has never happened before, according to Mark Finkelstein, the chair of the nominating committee.

Genco emerged as the unanimous choice due in part to her efforts to advocate for her own students while also organizing and executing an on-site vaccination clinic with Penn Medicine at the Cranbury School. The effort resulted in the vaccination of more than a thousand educators throughout Middlesex County, he said.

“In the midst of all she was handling in her own district, Susan was thinking beyond Cranbury to the welfare of educators throughout the county,’’ said Mark Finkelstein, who is the superintendent of schools for Educational Services Commission of New Jersey and also chairs the nominating committee of the MCASA. “She tapped into all the traits that have served her so well during her career - compassion, organization, resilience, and strength in leadership - and utilized them well during a time they were needed the most.’’

Callahan said the academic year began without a playbook, and required a compassionate, strong leader who was grounded by an unwavering commitment to advancing learning while keeping students and staff safe.

“Susan oftentimes referred to this year as trying to ‘build a plane while in the air’ and that is entirely accurate,’’ Callahan said. “With each decision she faced, there were at least ten tentacles attached that needed to be considered before moving forward. She navigated all of it, during the most trying of times, with grace and tenacity. I can’t think of anyone more deserving of this honor.’’

From the students’ perspective, Cranbury Student Council President Syra Bhatt said that even during a “weird year,’’ Dr. Genco went out of her way to not only bring the students back to school, but to help them pursue their passions. She said Genco worked hard to make sure students had as many traditional experiences as possible, including an outdoor 8th grade dance, graduation and also helping Bhatt realize a personal goal of having an informational assembly about Juneteenth.

“Because of her, we got to go in person and we are really grateful for that,’’ Bhatt said,  “She fought for us and she thought about our safety as well, which are two really important things.’’

The 8th grader said she and her fellow students appreciate how Genco was “just really calm through the whole process.’’

“She’s such a kind and thoughtful person and makes every student feel like an individual,’’ Bhatt said. “l just want people to know she’s a really great principal and she makes students really happy.’’

Genco has led the Cranbury School District for the past 10 years as Chief School Administrator. Prior to that, she was a principal in the Brick  Township School District. She received her undergraduate degree from the University of North Carolina at Charlotte and completed her doctorate in educational leadership at Rowan University.

Her many accomplishments include: Dr. Genco works with a student.