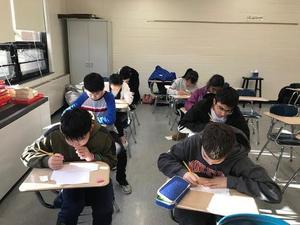 Team places 5th at competition!
For the last several months, Cranbury students in grades 6-8 have had the opportunity to compete in the Christian Brothers Academy Math Competition. Each month, interested students completed a 30 minute, 10 question, written competition. Of the 490 students in the region who competed in this written portion of the competition, Jonathan Ji was the top scorer for Cranbury.
On February 27th, the Cranbury team which included our highest scoring individuals competed in a final live event at the Christian Brothers Academy. This live event consisted of four rounds in which the team members had to work collaboratively to solve mathematical challenges. Of the 15school teams in attendance, the Cranbury School team placed 5th.  Congratulations to the Cranbury School CBA Team ~ Lizabeth He, Emily Huang, Jonathan Ji, Gayathri Kilaru, Luca Bonagura, Larry He, Harry Jones and Ayan Khanna. The team was under the leadership of Mrs. Val Rodriguez. The CBA Team will be invited to a future Board of Education meeting.